“The Minister for the Interior has on the advice of the Northern Regional Security Council and by Executive Instrument renewed the Curfew hours for Bimbilla Township from 10:00 p.m to 4:00 a.m effective Friday, 10th January 2020” This message disgusts me anytime I read it. What data exactly does the Regional Security Council use in making their decision in advising the minister of the interior?  The Bimbilla curfew is clearly not necessary anymore. More so it is largely non-functional and open to the market.

I have written many times about this curfew and its consequences in the on the community. Curfew is supposed to be a tool used to calm the situation when there is an escalation but not to be used as a way of life. The last time I wrote about it with northalive that was in 2016 and this current curfew was entering its second year. It is four years since and the curfew has become the way of life for people of Bimbilla. 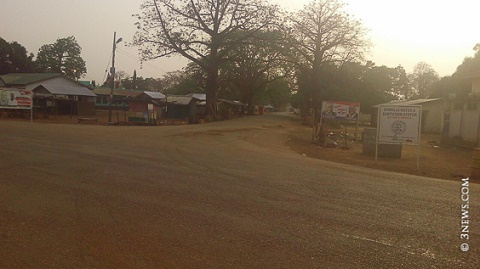 The curfew is now entering its 6th year straight. Is this really the way to deal with chieftaincy crises? If the government wants to intervene and solve the problem they should, but this needless curfew has to be lifted in the meantime. It is obviously serving no one except for the local authority that implements and control it.

Now anyone can bargain for a curfew free night does undertake their activity. I don’t know the process of this bargain whether monies are paid or not. But what this shows is that a current curfew is just a tool against the masses. Instead, making the curfew a commodity that can be bargained for why not lift it entirely? Do you care more about an outdooring than respecting the basic rights of the people? It is OK to lift the curfew for the night for a concert but not okay to lift it for the growth and development of the municipality? Should people contribute money to buy their very natural rights and freedom?

There were many nighttime economic activities that died with the unending curfew yet the authorities seem not to care. They use the curfew as an excuse of not undertaking any developmental projects in the municipality.

Someone may be wondering if the curfew is so non-functional, why do you care?

The fact is that, no matter how non-functional it is, there is still a huge budget for it. Once in awhile the security can decide to roam and squeeze money out of innocent victims.

The last time I checked, anyone who is caught during the curfew hours is liable to a fine payment of GhS 200. How is this money managed? Is it paid on spot or after an arrest is made? Well, we all know what this means for the innocent natives.

Instead of carrying a dead log that has no use for you why not just let go? I cannot blame the ministry of interior of this insensitivity. I can only blame the local authority who feeds the information to the ministry. It is in their interest for the curfew to continue to exist since it is the fat cow that yields the milk. I’m even moved to believe that sometimes it is in the interest of the authority for the scene to be made anytime Bimbilla enjoys peace for a while. Just so the unending curfew can be justified.

I wrote about the havoc erosion is causing in a suburb of Bimbilla, there are many problems like that facing the municipality but the money will rather be used in servicing a needless curfew. The curfew is the goose that lays the golden eggs to the authorities in charge, who cares if it kills chicks of the natives?

I was very disappointed when the curfew was renewed again this year instead of getting lifted. How can a security system be so insensitive to the same people it claims to protect? Most of the shootings that have happened in the township in recent times have been nothing but crimes committed by criminals whom if the security did their job right could identify and prosecute. But instead of doing their job, they will rather impose a curfew on the innocent general population. Not even a single person has been prosecuted since the start of this chieftaincy crises but the curfew has affected us all, innocent or guilty.

Majority of the productive youth have fled the town leaving it dried and slow. Every town, city or even country is trying to make their place conducive and inviting to people in hopes of development but Bimbilla is doing the exact opposite with this insensitive curfew imposition. It is just the laziest way of providing security to the people.

Why will anyone want to invest in a town that has curfew imposed on them? And without this investments how will the town ever grow? Do we have to pause development just because the security fails to do its job? I think the DISEC and other stakeholders should take another look at this issue. It is obviously causing more harm than good.

The gross incompetence of the local security is not limited to only the curfew. They always chose to run from issues instead of facing them.

Another case was the suspension of the Gmantambu radio which is the only voice of the entire municipality. There were legitimate issues raised with regards to ownership which the local authority could easily have handled if they were up to the task. Unfortunately, they resorted to the laziest way again by suspending the radio.

I personally use to run a health program at the station, educating the people and calling for health consciousness. This and many useful programs and entertainment was called to a halt to serve the interest of a few people over the masses.

The curfew situation has become a human rights issue. Sometimes I even forget we still live in a democratic society. How long is the curfew going to be used as a scapegoat for security incompetence? How long are we the people going to be silent and continue to suffer the consequence of this needless curfew?

I know some people may still be naive to believe that the curfew actually serves the people. But when you take a look at it critically, you will see the point of this article. The ordinary native of the town is tired of the whole thing. Everyone is crying for a lasting solution but you can’t just throw people in a curfew and hoping for the crises to go away. You have to act and make a decision to end the issue.

In the meantime, the curfew has to end. The authorities should do what they have to do while the general public is free to live their lives. My right to movement at any time has nothing to do with your decision or indecision to solve a chieftaincy issue.

If anyone with authority truly cares, I call on you to start the conversation that will lead to an end to this needless curfew. It is now a huge nuisance to the land and the people. Sometimes my friends ask me, “What the hell are you doing in Bimbilla?” This should paint a picture of the brand Bimbilla has built for itself over the years as a place not to be. It is disheartening that people just don’t care.

The curfew is just a way to keep the conflict fresh all the time and to constantly remind us that we are still fighting. It tells us not to forget the past incidences and forge ahead. It teaches our children that this is a new way to live.

If you have to move at night you have to break the law therefore it is OK to break laws when need be. That is exactly what we teach our young ones with this unending curfew. The current one might have lasted for 6 years but the entire curfew period has been there since 2003. That is about 17 years today. When you hear of any criminal case in Bimbilla go to the police station and see the age group of the people involved. If this does not worry you then I doubt if you have the interest of the municipality at heart.

The curfew has real consequences on the society especially the young ones. That is why curfew is not meant to be a long term solution. It is supposed to be a short term tool used by the security to calm a place when there is rioting. Unfortunately, our local authority thinks that the problem can be solved with 20 years of curfew. It will only result in unimaginable consequences that we have to deal with again.

If our leadership cannot discern issues and take proper action, we the people have to knock them awake. We must show them that we are tired of the curfew by speaking out for ourselves. We must unite behind this to rid off the lazy attitude of the local authority. We can’t just keep quiet and suffer while living in a democratic society. We also matter.

It is very easy for the minister of interior to put a signature asking for the curfew to be renewed but not for the people who suffer from the consequence. Does he pause to think what it will be like to have his basic human right curtailed for 6 years? The people here have suffered for nearly 20 years.

The local authorities might not care because they have a lot to gain with the curfew. The ordinary man has everything to lose. When he sleeps it is his shop that gets broken into, it is his animals that get slaughtered and so on. I could go on and on with the negative implications of this unending curfew but that is not necessary. I hope that this message reaches the leaders who truly care about the people and the future of Bimbilla. This curfew must end now. It is enough.

The political mind: read mine.